Brain Injuries in the Military

Brain Injuries in the Military. Cohen Cramer’s personal injury team has specialist knowledge in relation to claims for head and brain injuries.  Our service will help you develop a rehabilitation plan at the outset to identify your immediate needs with…

Same Roof Rule Abolished. If you have been the victim of historic sex abuse then we can help you claim the compensation you deserve. We appreciate that no amount of compensation can ever undo the pain and suffering caused, however, it can…

Claim for military hearing loss. Have you suffered from hearing problems or ringing in your ears whilst serving in the British Army, Navy, RAF, Territorial Army, or Reservist?  If so, you could be entitled to compensation as well as the…

The same roof rule. Last chance for the victims of the ‘same roof rule’ as applications to the CICA have to be made by 13th June 2021. The Same Roof Rule. Victims of historic abuse who due to the “…

Injury from Friendly Fire Claim. Have you been injured while on operation due to friendly fire or due to problems with your kit or equipment  If so, you may be entitled to compensation. While the legal system in England and… 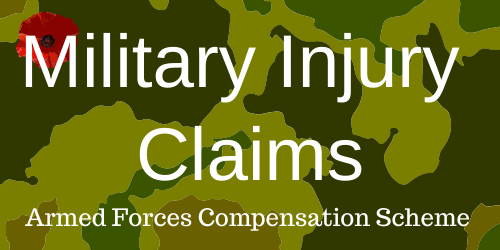 Military PTSD Claims. It is a common feature of Military life to face traumatic events.  Such experiences can have a long and lasting effect on a person’s mental health, impact on their work and day to day living and their…

Forces Bullying Harassment Claims. We are saddened to hear the RAF’s Special Police investigation is investigating an incident involving service personnel. The individual has been allegedly been subjected to an assault whilst naked with a mortar barrel during an initiation…

Bullying and Harassment in the Military

Bullying and Harassment in the Military. Everybody has a right to be treated with dignity and respect at work regardless of rank or grade. Unfortunately, this often does not happen. Statistics show that service personnel can be the subject…

Unsafe Equipment: Military Claim. The MOD has a duty of care to ensure work equipment is safe and suitable for use.  Occasionally, things do go wrong resulting in service personnel suffering injuries that can be life-changing.  Examples of equipment failures…

Serious Military Injury Claim.If you have sustained a serious injury while a member of the British Armed Forces (including reservists) then you may be entitled to claim compensation. Members of the Armed Forces often suffer very serious injuries due to…