Same Roof Rule Abolished. If you have been the victim of historic sex abuse then we can help you claim the compensation you deserve.

We appreciate that no amount of compensation can ever undo the pain and suffering caused, however, it can help you to move forward or to start a new life, possibly retrain or return to education, or simply feel that someone has finally listened.

By definition, historic abuse took place many years ago and until recently, many applications made to the Criminal Injuries Compensation Authority, in respect of sexual abuse that took place between 1964 and 1979, would have been rejected under the “same roof rule” which was part of the CICA scheme during this period.  This unfair rule stated that if the abuse had been perpetrated by someone that lived under the same roof as you, then compensation would not be awarded. As is often the case, most instances of sexual and indeed physical abuse are found within the family home, but this would also apply to children at boarding schools, remedial houses, orphanages, and care homes.

Thankfully, this rule has been abolished and the Government has made it possible for victims of historical abuse, to now qualify and make an application for compensation.

The deadline for making an application is 13th June 2021, and therefore it is imperative that you act now. Applications made after this date may be rejected and compensation that is rightfully yours may be lost. Even if you have previously made an application and had it rejected under this rule, you should make a new application now.

Get the help you need

While you do not require legal representation when applying to the CICA, cases involving historic abuse can sometimes be difficult to pursue and so we are able to represent you in your application on a no win-no fee basis.

To see how we can help you claim the compensation you deserve get in touch with today: 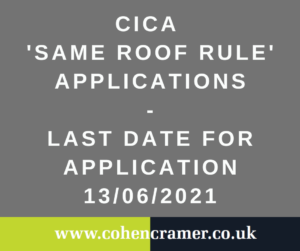